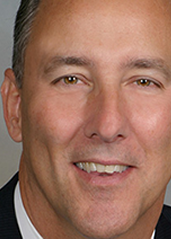 Gordon is managing partner of Plante Moran. With more than 30 years of experience, he is known as a leader who models and encourages in others what he calls true stewardship: “the careful and responsible management of something entrusted to one’s care.” As the leader and steward of Plante Moran, Gordon has guided our client service, growth, people development, risk management, and strategic direction since he became managing partner in 2009.

Though Gordon became managing partner at the height of the economic downturn, he and the management team steered the firm through uncertainty on to a clear path of growth. A 2012 merger with Chicago firm Blackman Kallick vaulted Plante Moran to a leadership position as the sixth largest firm in Chicago and further solidified our standing as a leading regional firm in the Midwest. Gordon shares his leadership philosophy and perspectives on the joys, challenges, and “aha moments” that he encounters as managing partner in a biweekly blog.

Gordon’s career is notable for more than 25 years in leadership roles at the firm, including eight years as group managing partner for client industries, eight years as office managing partner of our largest office, and 10 years as practice unit manager of our governmental practice. By his own admission, Gordon became steeped in the firm’s culture and client service model through dedicated mentors and coaches who instilled the ethics, quality, and “we care” philosophy that he so richly embodies. Those philosophies are clearly on display in Succession Transition: a Roadmap for Seamless Transitions in Leadership (2011), the book he co-authored with former managing partner Bill Hermann.

With Gordon’s leadership, Plante Moran has maintained its presence on FORTUNE magazine’s list of the “100 Best Companies to Work For.” As a strong proponent of diversity, Gordon and the management team launched the Women in Leadership initiative, which is designed to groom and mentor female leaders and support their success at the firm. Gordon was reelected to serve a second term beginning in July 2013.

Gordon has given speeches and written articles on several topics, including “Building a World Class Culture,” “Partner Participation Systems,” and “Matrix Management in a Professional Services Firm.” He is active in a number of business and community activities and is a passionate supporter of children’s literacy and the United Way. Gordon also serves on the board of Praxity, which is a collection of international and domestic firms cooperating to help businesses around the world. In 2010 and 2011, Gordon was named by Accounting Today as one of the “100 Most Influential People” in the accounting profession. He graduated from the University of Michigan, Stephen M. Ross School of Business, with a B.B.A. in accounting.