Why Diverse Organizations Perform Better: Do We Still Need Evidence? 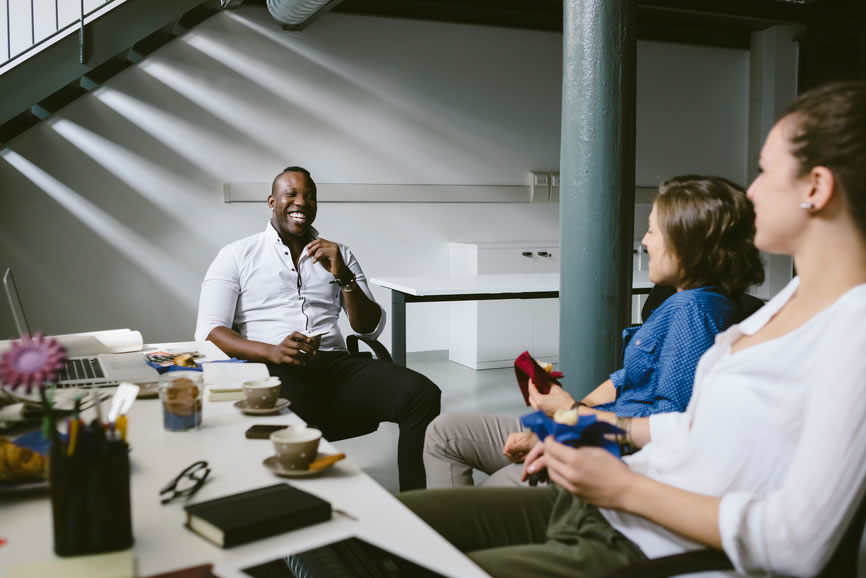 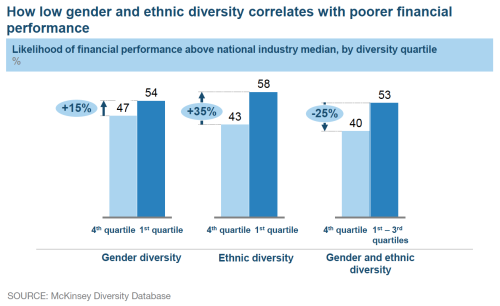 McKinsey’s research also noted a positive relationship between financial performance and diversity in leadership, although this varied by country, industry, and type of diversity (gender or ethnicity). The U.S, for example shows no statistically significant correlation between gender diversity and performance until women make up at least 22% of a senior executive team. Even once that point is reached, the relationship observed for US companies is still of relatively low impact: for every 10% increase in gender diversity there is an increase of 0.3% in EBIT margin. The UK boasts a much more significant relationship between gender diversity and performance, experiencing ten times the impact for their focus on gender diversity than U.S organizations (even after they’ve reached the 22% tipping point). The correlated benefit is an increase of 3.5% in EBIT for every 10% increase in gender diversity in the senior executive team (and 1.4% for the board). It is also interesting to note that while U.S. companies have made efforts in recent years to up the number of women in executive positions (progress is limited but measurable), the data show that less attention has been given to the attainment of racial and ethnic diversity. 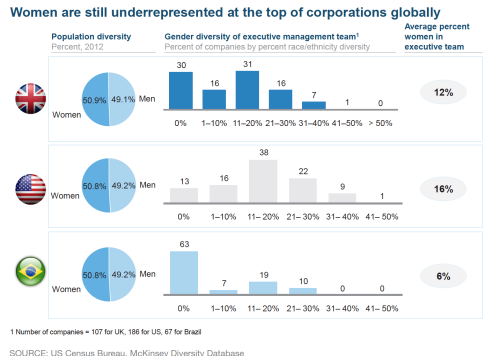 Above-median financial performance was achieved by a higher percentage of companies in the top quartile than the bottom quartile for ethnic diversity in all the countries and regions McKinsey investigated. The message that diverse organizations perform better is clear, but as we asked earlier, why? McKinsey & Company offers the following supported hypotheses that diversity helps to:

In the war for talent, diversity increases not only an organization’s sourcing pool but attracts talent that has shown to place significant value on diversity (such as Millenials). Additionally, because groups targeted by diversity efforts are usually underrepresented, they are often great sources of desirable talent. McKinsey & Company’s report cites a recent study that found, on average, lesbian, gay, bisexual, and transgender (LGBT) recruits tend to be more highly skilled and more likely to have advanced degrees. By focusing on diversity, organizations align themselves with an increasingly heterogeneous customer base, enabling stronger bonds with customers. Workplace diversity increases employee satisfaction and fosters positive attitudes and behaviors and creates better decision making through combining diverse groups of thinkers. These organizational aspects that diversity bolsters ultimately make up the foundation for organizations that perform better financially.

As the workforce becomes increasingly global, diversity is only going to increase in importance. Regulators in some European countries have already introduced diversity targets for boards, such as those set out in the UK Equality Act 2010. Despite the importance of diversity, many companies’ approaches are still very one-dimensional, opting for just a single diversity program to cover all aspects of diversity: racial/ethnic, gender, and sexual orientation. This may be why, on a large scale, companies often make progress in only one area of diversity. 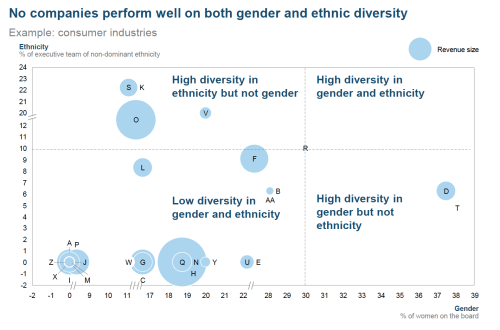 McKinsey & Company’s research suggests that this one-dimensional approach to diversity results in a focus on a particular category rather than the opportunity as a whole. They advise that organizations should instead adopt tailored programs and make more targeted efforts within specific areas of diversity, believing that these will be necessary to make measurable progress and ensure relevance to business goals.

It does seem odd that we’re still making a statistical case for what everyone knows to be true: diverse thought, experience, outlooks and cultures make for stronger solutions, more rapid innovation, more engaged employees and customers, and better all around performance. I guess more evidence doesn’t hurt. 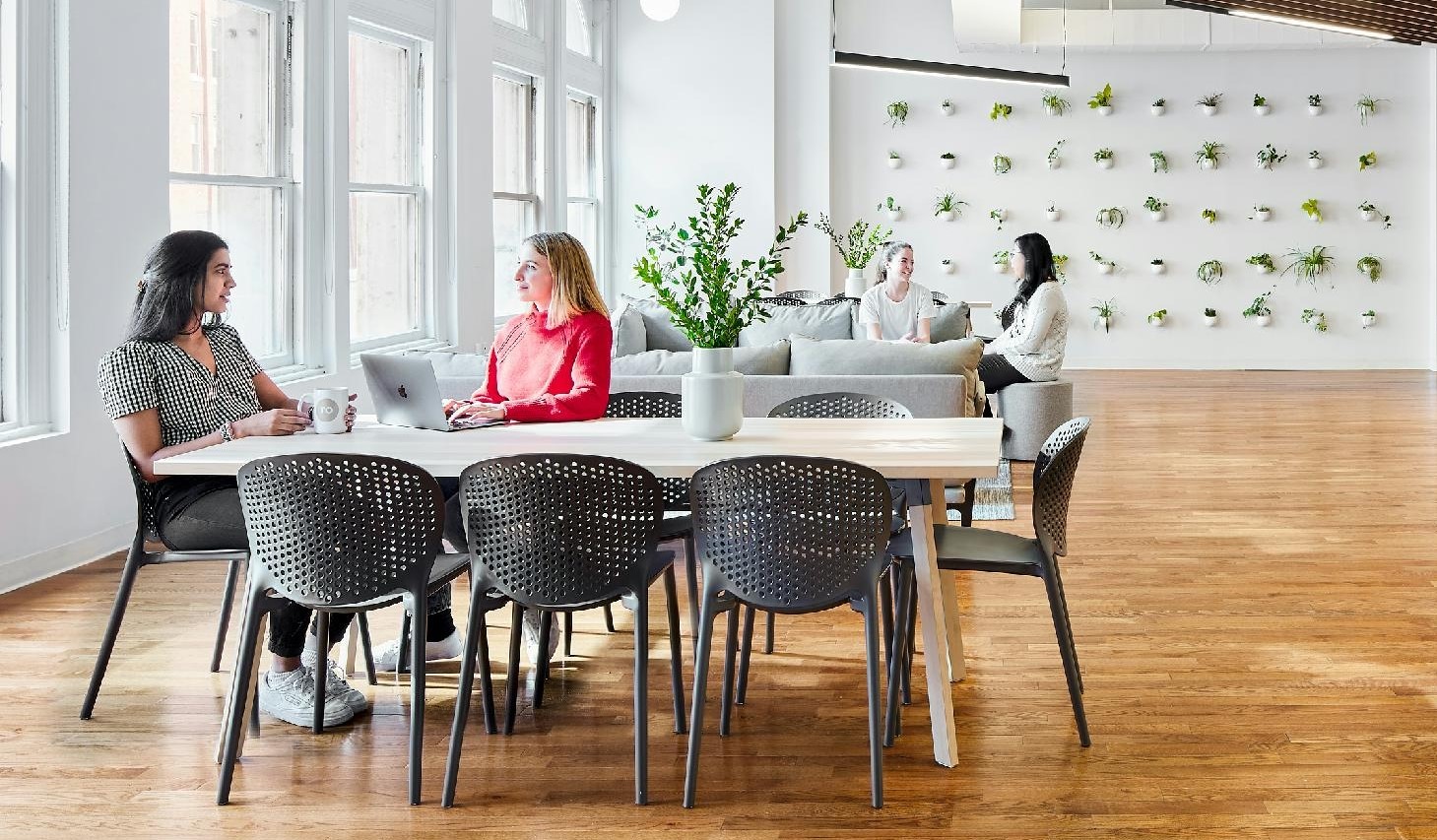 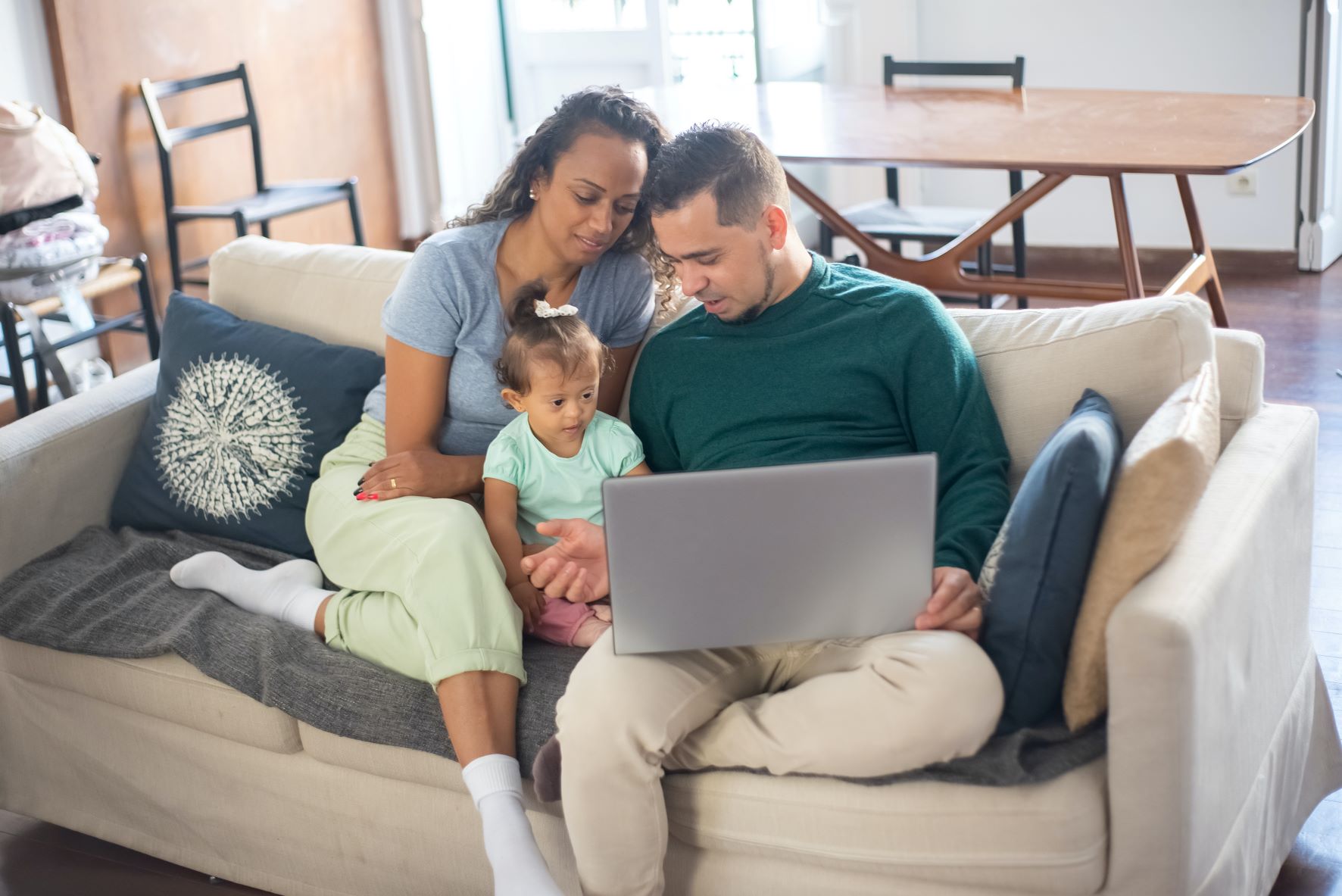 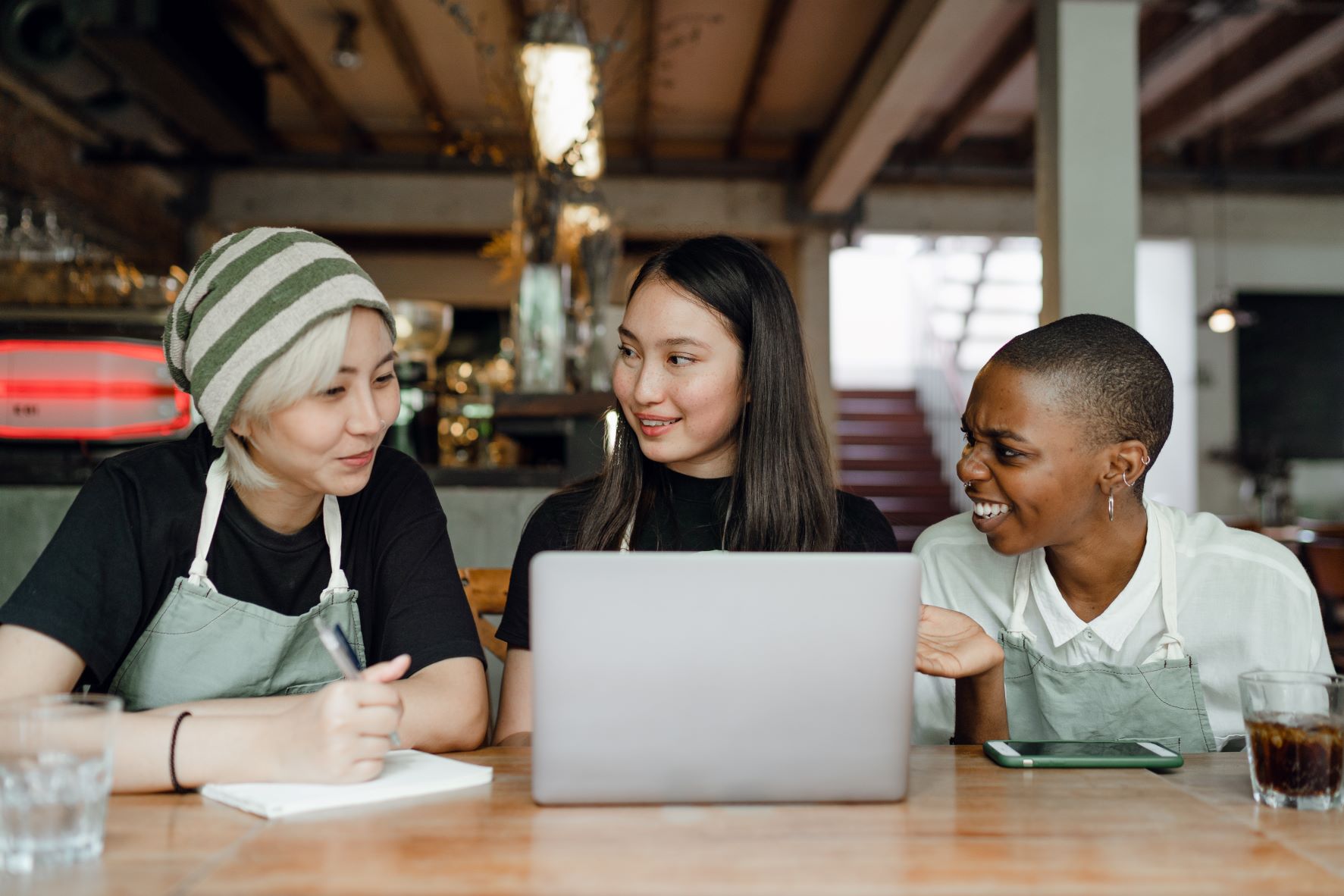 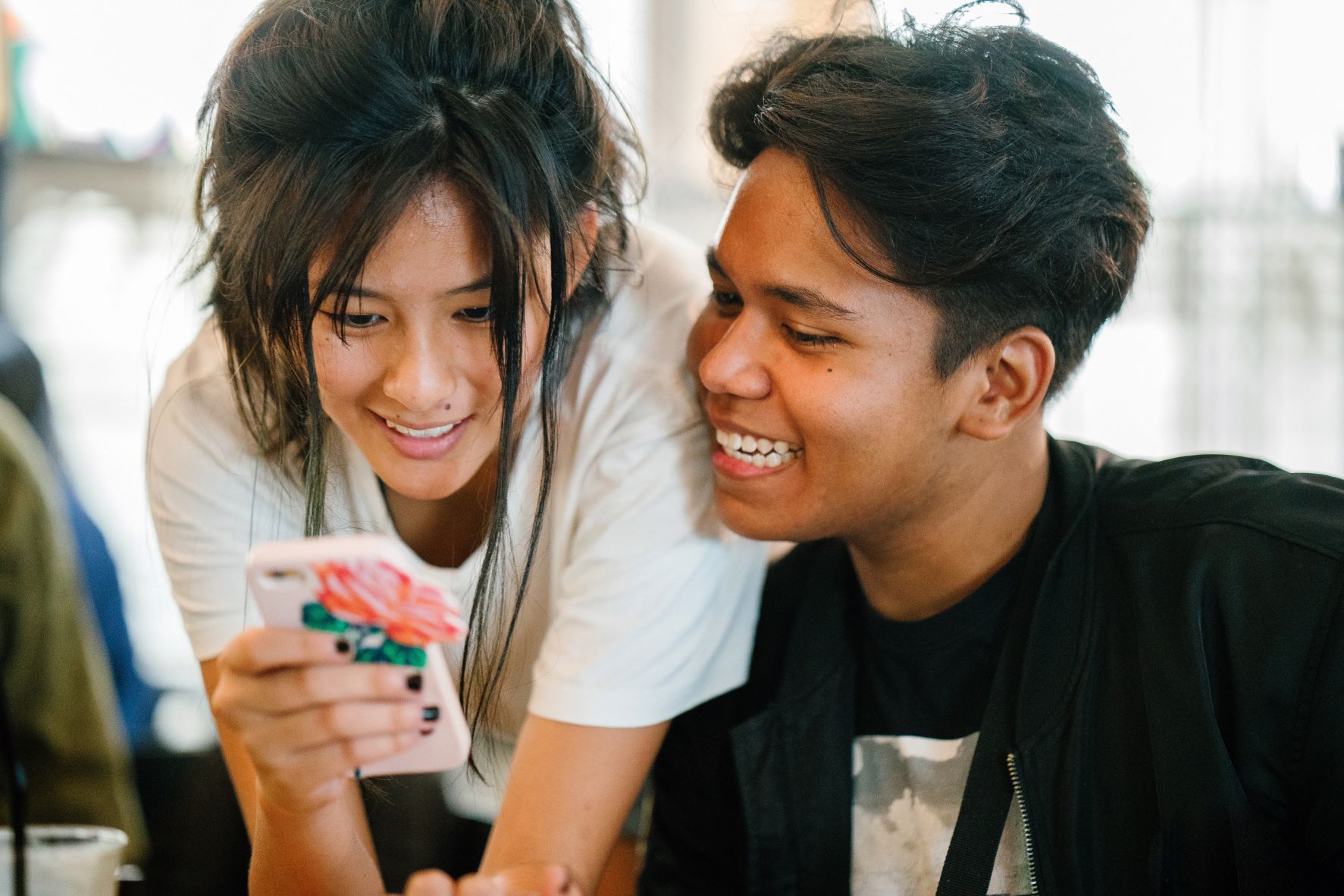