Millennials, More Than Any Other Generation, Cite Gender Equity as a Top Concern in the Workplace 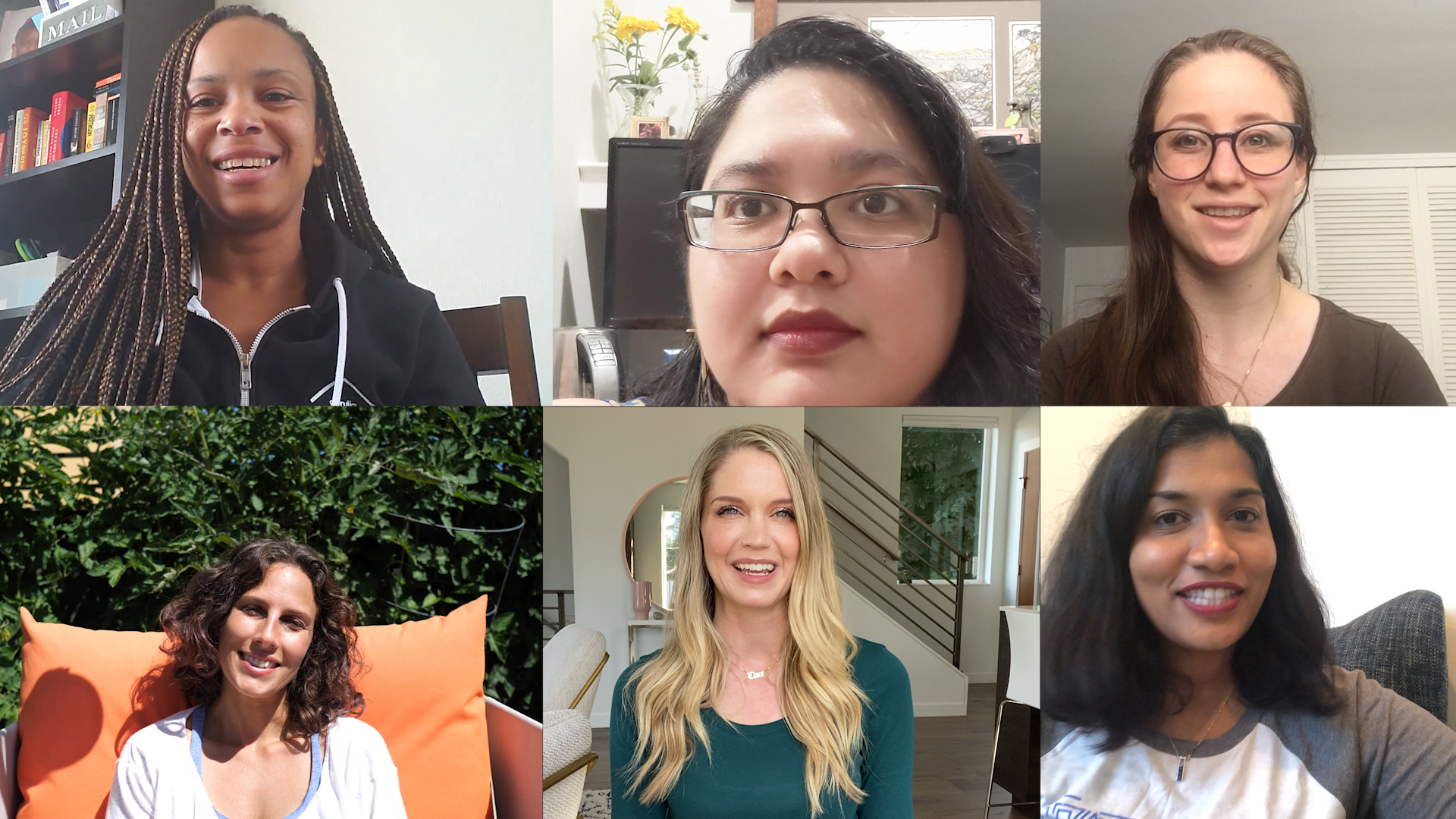 Image: Zillow believe that creating a workforce representative of our communities enhances their culture and is key to their success as a company.

Leah Sakas still remembers being told not to run like a girl.

Sakas is vice-president of central operations at Zillow, the online real estate marketplace that’s become so popular among millennials for “Zillow surfing,” that it was featured as an SNL skit parodying chatlines for the over-thirty crowd.

But Zillow isn’t just capturing the market of millennial homebuyers and late-night browsers. It’s also attracting a millennial workforce seeking out employers who deliver on issues such as diversity and pay equity.

“Our generation wants to be seen, heard and appreciated for who we are, and not defined by preconceived notions of who we should be,” says Sakas, a millennial herself.

Zillow was named #24 on the 2021 Fortune Best Workplaces for Millennials™ list — the biggest mover, it jumped 42 spots from its 2020 ranking. The list, produced by Great Place To Work®, is based on anonymous survey data representing more than 300,000 millennial employees, assessing their experiences of trust, innovation, company values and leadership.

Within this year’s employee survey data, two phrases in particular stood out among employee comments. The terms “gender equity” and “male counterparts” were cited more frequently than among any other generation in Great Place To Work’s wider research, and more than in any year prior.

Zillow’s commitment to gender equity is one of the reasons millennial employees have named it a great place to work. The company reviews its job descriptions for gender-neutral language and aligns job levels against the broader marketplace to ensure appropriate compensation ranges.

Zillow also runs twice-annual checks on pay, and for the past 12 months has maintained pay parity between genders doing the same work.

“We ensure we have equitable standards for work not based on the person,” says Sakas. “It’s the output, not who the person is.”

The power to speak up

The glass ceiling and pay parity aren’t anything new, of course. But on the back of global movements like #MeToo and Time’s Up, workers are emboldened to speak up. In late 2019, a group of UK businesswomen launched the #MeTooPay campaign, a spinoff focused on closing the gender pay gap, sparked by an equal pay case with French banking giant BNP Paribas.

“Unfortunately, in the past it was suppressed,” says Tyler Crawford, chief operating officer and millennial employee with Bankers Healthcare Group (BHG), which came in at #11 on the Millennials list (small & medium category). “And now in the age that we’re in, people have both the information and the ability to talk about those issues.” 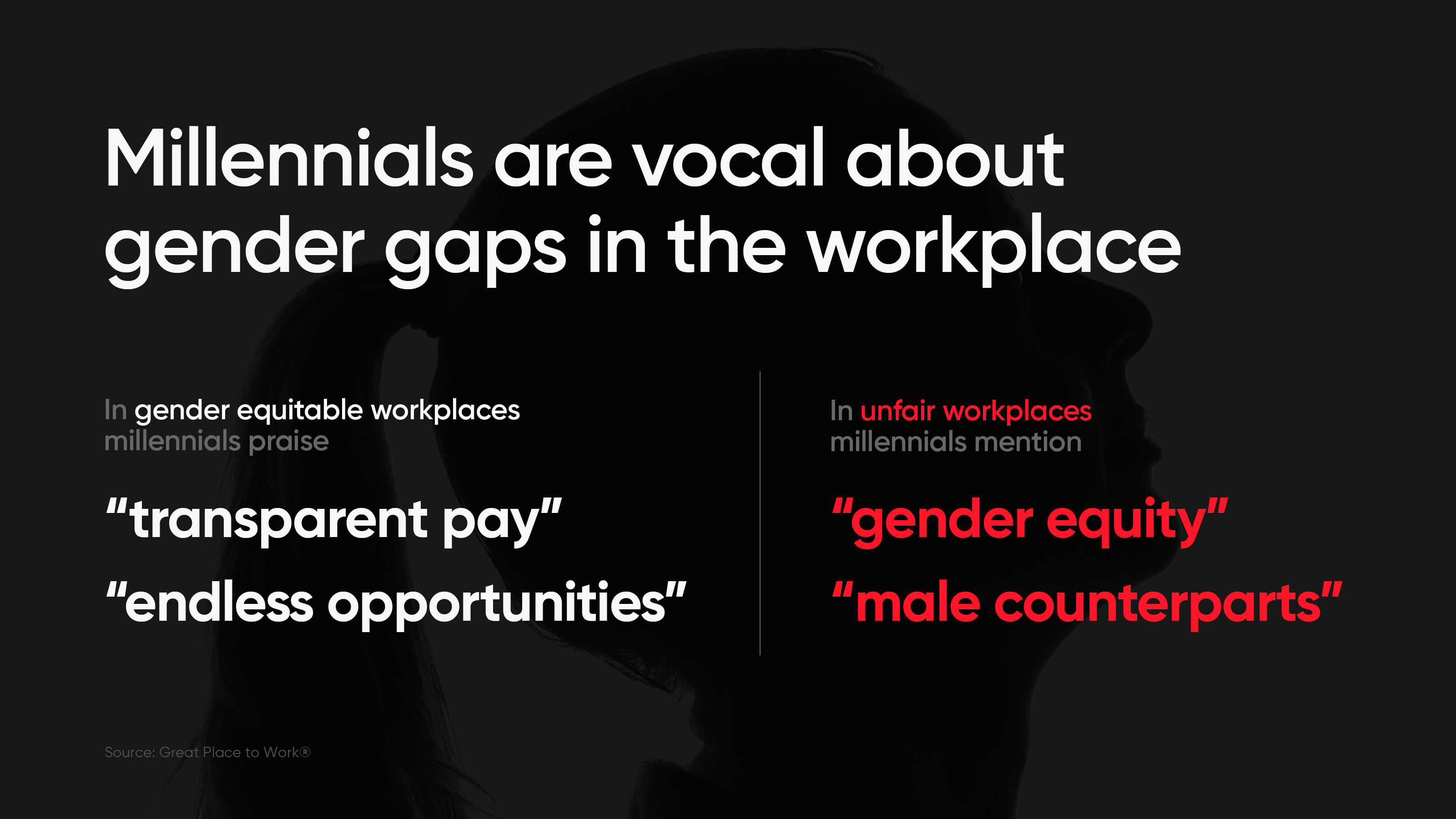 Crawford credits BHG’s focus on professional development for its high gender equity. In Q1 of 2021, BHG had over 80 promotions across the organization, almost perfectly balanced at 51% male and 49% female. And the company’s leadership team is 40% women, compared to the national average of 21%.

All BHG employees have growth tracks via annual performance reviews, quarterly award ceremonies and set milestones. But where they differ from more traditional paths is with a flexible approach that favours individual contributions over set promotion timelines.

“What makes us unique is that additional flexibility on top of the structure, to let the runners run and to give growth potential to people making a bigger impact than you might see in a normal trajectory,” says Crawford.

Zillow, too, is focused on shattering its own glass ceiling, with women accounting for 35% of roles at director level and above, up from 26% in 2016. The company has also seen a boom in the number of women candidates applying to work at Zillow, at all levels.

Climbing the corporate ladder with a kid under your arm makes for an empowering image but doesn’t typically translate into reality. That’s why companies that support working parents — through anything from paid parental leave to on-site nursing rooms — are particularly appealing to millennials seeking gender equity.

Since 2010, Zillow has offered free overnight breastmilk shipping for nursing mothers away on business trips, in addition to benefits like flexible return-to-work scheduling after parental leave, healthcare coverage for infertility services, and $10,000 in assistance that can be applied towards the costs of adopting a child.

But while these perks are a godsend to working parents, child-free employees are often forgotten from the benefits table.

Great Place To Work’s research found that millennials with no children are among the highest risk for leaving a workplace — they appreciate the importance of parental leave and other family-focused perks for their colleagues, but they also want perks that are relevant to their own lives.

And after more than a year of remote working under a pandemic, the perk that millennials seem to want most right now is the flexibility to work from anywhere.

BHG’s shift to a hybrid work model has enabled them to hire talent they previously wouldn’t have been able to find or attract. In the past year and a half, they’ve hired people in 32 different states, while ensuring remote workers’ pay is competitive with the local market, wherever that may be.

“That virtual environment has definitely changed the game from a recruiting standpoint,” says Crawford.

Meanwhile, since the start of the pandemic, roughly 2,000 of Zillow’s nearly 6,000 employees have relocated. Now, only 4% of its staff is fully office-based. At the same time, Zillow has smashed its application record, receiving 24,000 candidates in March, up 60% from its previous highest month. And within that pool, the number of women applicants is growing.

“You can’t say causation, but you can assume some level of correlation between our commitment to flexible work and that interest,” says millennial manager, Meghan Reibstein, vice-president of organizational operations at Zillow.

“This movement into flexibility opens up space for not just women, but people with different backgrounds and different interests to stay in a corporate environment, but in a new way. [It’s] allowing them to wrap their work around life and not the other way around.”

We’ve still got a long way to go before gender equity is the norm across all workplaces, but it’s clear that employers who want to attract a millennial workforce are going to need to step up. After all, this is a generation that’s pushing for the freedom to run — not just like a girl, but like themselves.

See the full list of the Best Workplaces for Millennials 2021.