A Healthy Culture for Women & Diversity in Tech 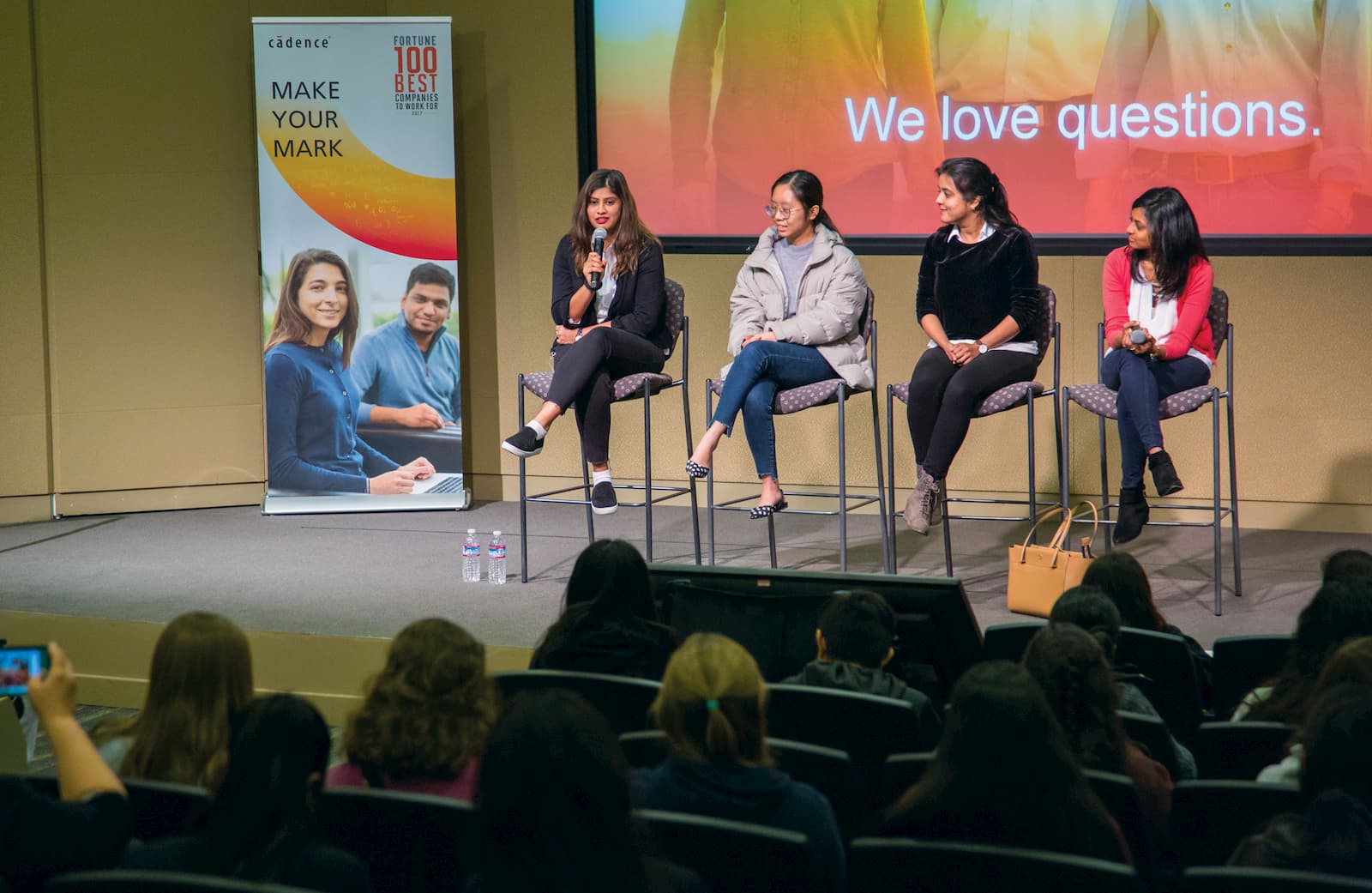 Cadence CEO, Lip-Bu Tan’s focus on culture, listening to employees, creating pathways to inclusive innovation, and working on closer relations with key customers has made Cadence a great place to work and a formidable competitor. Neil Zaman, Senior Vice President, Worldwide Field Operations, says, “We’ve worked very hard to rebuild the culture and establish long-term trust with our customers. Today, we see that the market-shaping customers and critical ecosystem partners rely on us to deliver their most critical technology.”

In 2015, the company earned its first-ever spot on Fortune's 100 Best Companies to Work For list, which is published in partnership with Great Place To Work. Cadence repeated the feat in 2016, 2017 and again in 2018—when it hit its highest ranking, at No. 38. What’s more, it earned a variety of other honors along the way, including ranking as a Best Workplace for Diversity, for Millennials, and for Giving Back. And, in 2018, Cadence’s global culture also earned it a spot on the World’s 25 Best Workplaces.

Cadence has focused on building a culture that fosters inclusion and embraces diverse backgrounds. It has become a desired destination for early career and female talent working in the EDA industry, which typically has a more tenured, male population. Not only does the company have strong internal support for female and junior employees, with additional opportunities for mentorship, networking, and focused development, but the company is helping build the future pipeline with partners like Girls Who Code and the Anita Borg Institute.

Other highlights in the company’s culture today are fairness, psychological safety, and the pride employees take in their work. Nine out of 10 Cadence employees say they “make a difference” in their jobs and say they are treated as a full member of the company regardless of their position. These levels surpass the benchmark scores for the 100 Best overall. In addition, 93 percent of Cadence staffers say they can take time off work when necessary, supported with programs like Flexible Vacation and Volunteer Time Office—again beating the 100 Best benchmark. Employees’ sense that they can leave work as needed is a key factor in the company’s innovation success. Great Place To Work research has found that a hidden barrier to innovation is “everyday fear”—the perception that employees cannot take time off suddenly to attend to family emergencies or handle other pressing personal issues.

The fact that Cadence employees feel included at work and purposeful goes hand in hand with the company’s increased attention to clients. In essence, the empathy Lip-Bu Tan and his leadership team are showing employees is paid forward as Cadence employees put themselves in customer shoes and look to serve them amid changing market conditions. In fact, Cadence employees report much higher levels of extra effort and adaptability than their peers throughout the industry.

Having cured its culture, Cadence is now enjoying healthy financial results. Revenue more than doubled between 2009 and 2017, to $1.9 billion. And in sharp contrast to a net loss of $150 million in 2009, Cadence reported net income of $204 million in 2017, which are GAAP figures after tax. Cadence’s share price grew steadily from its 2008 low of $2.42, surpassing its pre-recession peak of $24 in 2016, and accelerating after that to a new high of $47 in 2018. The stock is far out-pacing its rivals in the technology sector. The tech-heavy Nasdaq composite stock index has climbed 62 percent in value over the past five years, while Cadence shares have soared more than 200 percent, to more than $50 per share in February 2019.

If investors and analysts were curious about the secret to the turnaround at Cadence, Tan spelled out his remedy in a conference call in April of 2018, saying, “I want to talk about the culture we are building at Cadence that underlines all our success. We are committed to driving an innovative and inclusive culture that embraces the diversity of our global workforce. The strength of our culture is highlighted by the recognition we received from Fortune. We earned the number 38 spot on the list of Fortune’s 100 Best Companies to Work For and are proud to make the list for the fourth year in the row. Our commitment to innovation can be seen in more than 20 significant new products that Cadence team has developed in the past three years. We are also focused on supporting employees through our Volunteer Time Off and Matching Gifts programs, and have been recognized by Fortune as a Best Workplace for Giving Back.”

Life at Cadence: An Employee Perspective

Supriya Ananthram is a 20-year veteran engineer who works on Cadence’s signature Virtuoso system design platform product. Before Cadence, she worked for industry leaders who used Cadence tools, including Texas Instruments and Teradyne. After 16 years with Cadence and sticking through the company’s most challenging time, Ananthram left Cadence for a rival firm in 2015, returning within a year because she wanted the “one team” culture.

She says, “As an engineer, 2008 was not a great time. The leadership had gone pretty aggressively on short-term goals. That had eroded customer credibility in the sense that customers had gotten a little bit antsy on that end. It seemed like there was not a lot of listening and things had gotten kind of bureaucratic. Not to mention that the stock price was practically in free fall, so there was a lot of uncertainty at that time. We didn’t know what was really going on.”

Ananthram was on a special project at the time and she and her teammates were waiting to see what would happen. They really believed in their product and the difficult times made them closer. Yet they were concerned that Cadence had lost its credibility and that customers were worried. She saw Lip-Bu Tan building confidence by emphasizing customer focus, praising the engineering talent, communicating how to rebuild trust and emphasizing the values, including ‘One Cadence, one team.’

She says, “I’m part of R&D, and usually R&D doesn’t speak to customers. But during that time things started changing and R&D got into more proactive roles. We spoke to customers to get feedback. The reason I came back was to work in an atmosphere where there’s a strong team, and culturally, you’ve got some kind of value system, and the technology that you’re working on is also great. I’ve known people for so long, it’s like my second family over here."

For the full story, read Cadence and the Culture Cure today.